My journey on becoming a developer

I got interested in tech because I had seen companies do amazing things using technology. I read about autonomous vehicles, A.I. in healthcare and many other revolutionary things that were pushing the boundaries of what I thought was possible and software was a big driving force. Software has introduced a huge jump in efficiency in the many industries where it is used so much that it leaves absolutely no doubt about its potential and, unsurprisingly, the engineers behind the jump are compensated to reflect this. I had seen all this and decided software engineering was the career I was going to pursue.

My plan after university was to get into web development. It seemed, to me, to be a very exciting place to start my career as a developer but getting a job was proving to be a challenge. The recurring issue from my employment interviews was my lack of industry experience. Slowly I came to realize two things. Firstly, employers used work experience as a proxy to determine competence. Yes, a very strong portfolio could convince them to ease back on basing a decision on this metric but often, your years of experience were going to be the more significant deciding factor. Secondly and ironically, the market for entry level developer jobs was vanishing and incredibly competitive as result. So, I needed work experience but was not getting the avenue to gain this because I could not get my foot in the door. I decided a strong portfolio would help my case and so I went back to working on that. While preparing myself for my next job search, I had been reaching out to several friends while job searching and as such I ended up with a constant stream of job advertisements coming my way. One of these advertisements was from Azubi Africa, and it was an apprenticeship program to become a software developer.

Azubi Africa’s message caught my attention because I realized this was what I most likely needed. They were willing to take you in, train you and place you in a job. Participants would end up getting that work experience employers so cherished and yet was difficult to come by as an entrant into the job market. I applied almost immediately, and an interview was scheduled a few days later. I would like to believe the interview went reasonably well because a week after, I was informed I had made it in.

We would be learning technologies like HTML, CSS, PHP (and working with PHP frameworks), git and how to work with Microsoft Azure. The apprenticeship had two tracks: Software engineering and Data Science. I applied to join the Software engineering track and for us the program was divided into two parts. We spent the first weeks learning web technologies and then the next months were dedicated to learning about Microsoft Azure. Of course, this was not a strict separation of the two parts of the software engineering track and we were free to go back to anything we did not understand. There was a lot of freedom to learn however you wanted, but the deadlines had to be met. To help with our studies, we were given full access to LinkedIn learning since we would be using that as our primary learning platform. Supplemental materials in the form of articles were made available if they were deemed helpful.

Things started off slowly as we got to know each other and were shown the scope of work we had to do and what was expected of us by the end of the program but that quickly changed by the second week. I met some very smart and wonderful people who I am still in touch with today. There were a lot of tutorials (both video and text) to cover before our weekly meetings. It took a lot of determination to work through the allotted tutorials while making sure I had working solutions to our weekly assignments ready to be presented. As time went on, however, I began to adjust to the workload.

Learning about cloud technologies using Azure was particularly enlightening because I had little knowledge working with them beyond uploading a project to a server. I got a clear picture of just why the cloud was as important as it is today and of the many possibilities it provided.

One good thing was that we had direct access to our tutor through the software engineering track’s slack group. We could leave questions on there and get the needed direction from our tutor or any group member who could help. Learning in this group was very social and towards the end of the program we were helping ourselves more than seeking help from our tutor. It felt like we were all in one big group assignment working towards the goal of becoming better developers. In the last weeks of Azubi’s 12 week program, we studied for and wrote certification exams for Microsoft Azure Fundamentals (AZ900) and Azure Developer Associate (AZ204). Though challenging, writing these exams ended up giving me an even deeper understanding of cloud technologies and the Azure platform. I am a lot more confident talking about these technologies than I was before Azubi Africa. For our capstone project, we tried our hands at building an employee management system. This project helped bring together all the knowledge I gained during the apprenticeship and showed the gaps I needed to work on. It was a great exposure to the software building process and it took the effort of everyone on the team to reach the goal we set for ourselves. Teamwork as a software engineer cannot be emphasized enough and building this project together with the other members of my group highlighted its necessity and the importance of effective communication.

I am now a PHP developer working mostly with the Symfony framework and this is largely due to being an Azubi Africa apprentice. What I learnt has played a significant role in helping me deliver on the job while meeting the expectations of my employer.  My short term goal is to be a more established PHP developer while learning all the practices that I need to build robust software products for the global market. In the long term, I hope to share the knowledge gained from my experiences any way I can, ensuring that others learn from this knowledge and become even better software developers. 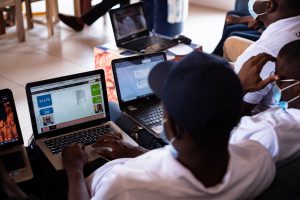 My journey to becoming a data scientist 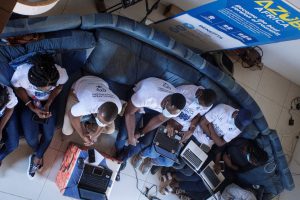